The United States’ foreign-born population is greater than 44 million. The world is in the midst of a refugee crisis. For the first time on record, more Americans support expanding immigration than not.

But in just the past two months, the current administration has: 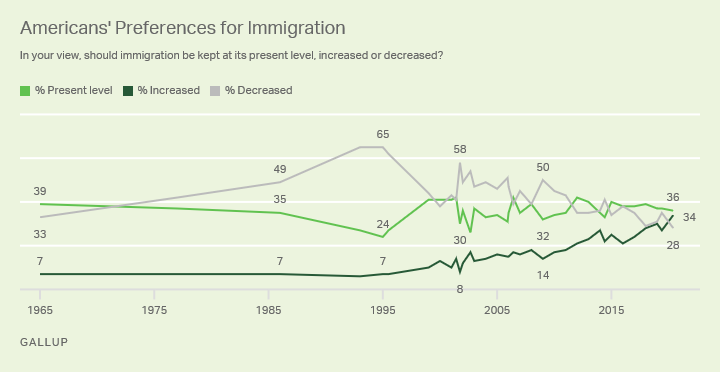 That’s to say nothing of the 23-page document that the National Immigrant Justice Center put together detailing every act and policy the Trump administration has put in place that has contributed to the dismantling of the asylum system since January 2017.

But why should I care?

I get it. You’re one of the many Americans (about 73 percent, according to the American Immigration Council) who was born in the U.S. to two non-immigrant parents. Why should you care what’s going on with those other people’s lives when you’re happy with your place on the ladder?

Let me start by saying that you shouldn’t care about the wellbeing and protection of others solely because you have a vested interest in the outcome. You should care for and protect the rights of other people – especially those with poorer life outcomes than yourself – because it’s the right thing to do. But if you need a reason, there are plenty.

First, foreign-born workers directly and positively affect the economy. Any increase in skilled laborers is going to increase overall productivity and promote economic growth. This is a fact the U.S. government chose to ignore when, in 2014, they put strict limits on H-1B visas, citing economic recession and a need to create more jobs for American-born workers. The opposite happened, as reported by New American Economy, in that the lack of highly-skilled workers stunted the U.S. tech economy and ended up costing Americans upwards of 200,000 jobs.

Foreign-born people make up a huge portion of the American population, in addition to their important position in the U.S. economy. The U.S.’s 44.7 million immigrants comprise roughly 14 percent of the total population.

As much of the country is in the middle of unprecedented social change and economic difficulty, we’re going to need all the help we can get to recover, and that starts with increased employment opportunities. After studying the Great Recession, the Brookings Institution found increased employment among immigrants to be an indicator of the end of an economic crisis. 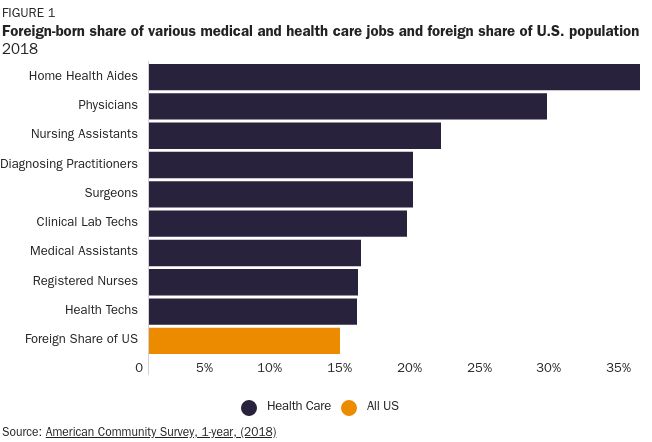 Speaking of the COVID-19 pandemic, the entire country owes what success we’ve had in fighting the virus and continuing daily life to our immigrants. Foreign-born workers are impressively overrepresented in the healthcare industry, making up roughly 18 percent of its workers – including 22 percent of nursing assistants and 29 percent of physicians.

Immigrants also make up an outsized portion of essential services in this country: 50 percent of maid services and a quarter of janitors; 22 percent of food service workers; 17 percent of delivery drivers are immigrants; 42.5 percent of all agricultural workers.

All of these employment numbers are greater than the 14 percent of the U.S. population that immigrants comprise. All of the jobs listed have grown exponentially more dangerous as conditions continue to worsen and cases keep increasing. Yet our foreign-born workforce continues to go to work, simultaneously combating the pandemic on the frontlines and preserving some semblance of normalcy in essential services.

How can I help?

Contact your representatives. It’s not always the most fun thing in the world, but making a call or sending an email can make a big impact. Recently, a wave of protests and lawsuits forced the Trump administration to reverse a policy directive that would revoke visas from many international students just one week after it was issued.

Attend a protest. Depending where you are and what you’re protesting, things can turn dangerous, so make sure you’re prepared for any eventuality. But if recent BLM and anti-police protests have shown us anything, it’s the power that large groups of passionate individuals can hold.

Donate. Many researchers and organization heads say that donating is the best and most efficient way to begin to enact change and help others. Here’s a list of well-known organizations that support immigrant and refugee rights, and I’ve included some more organizations – and short descriptions from their mission statements – doing good work and research below:

American Civil Liberties Union – “With more than 1.5 million members, nearly 300 staff attorneys, thousands of volunteer attorneys, and offices throughout the nation, the ACLU of today continues to fight government abuse and to vigorously defend individual freedoms including speech and religion, a woman’s right to choose, the right to due process, citizens’ rights to privacy and much more.”

Written by [Refugees Welcome!] intern, Jacob Lintner. Jacob has worked with [RW!] on the Communications Team since June 2020. He is a senior at Boston University where he studies broadcast journalism and sociology.

View all posts by adbacon120